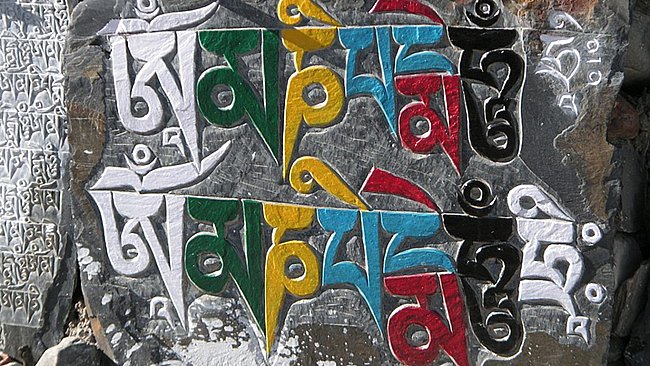 Mantra is a sacred utterance of a syllable, word or verse, which is considered to have possessed a mystical as well as spiritual efficacy. These words or syllables are generally used in Hinduism and Buddhism and are either spoken aloud or merely spoken internally in ones inner thoughts by either continuously repeating them or sounded just once. Generally, most of these Mantras do not have any apparent verbal meaning but they are believed to have an unfathomable underlying significance which eventually are distillations of spiritual wisdom. The continuous repetition of a particular Mantra can instigate a trance like state of mind in the practitioner which can lead him or her to a different level of spiritual awareness. Similarly, different types of mantras are used to bring out other psychic or spiritual purposes. In Hinduism, the sacred syllable Om is one of the most powerful and widely used mantras while the Buddhist mantra of Om Mani Padme Hum is the principal mantra in Buddhism.

In Buddhism, Buddhist Mantras or Buddha Mantra are the syllables and words chanted repetitively while practicing centering and consciousness shifting. The function of each Buddha Mantra can vary but most of them have the goal of helping an individual to inspire and invoke enlightenment within them. The act of chanting a mantra can help the practitioner in specific concerns of life while also offering a way to focus during meditation. It is widely considered that some of the mantras have an ability to call out helpful guides and energies to assist the chanters on their own path. Also, Buddha Mantras are believed to be the ways of learning and showing devotion to the teachings of Buddha. Buddhists in the eastern world chant Buddha Mantras around Buddhist arts like Buddha statues, Buddha images, etc to keep them motivated and inspired while practicing meditation as these mantras are believed to be another way of focusing the mind. Mahayana Buddhists are known to speak mantras while they are using prayer beads, known as malas. These malas help them count the number of times they have repeated the Buddha Mantra.

What are the contents of Buddha Mantras?

The Buddha's teachings, such as the Three Refuges or the Five Precepts, are frequently found in Buddha Mantra. Buddhists aim to imitate the Buddha's attributes by chanting the Buddha's teachings as Buddha mantras, which brings them closer to enlightenment. By repeating the mantras many times, Buddhists often learn them by heart. They memorise these mantras and then teach them to other people verbally in Buddhist cultures. Buddhists show their devotion to the Buddha by giving offerings and bowing in addition to reciting Buddha Mantras.

Among several Buddha Mantras, here are three examples for one to try:

This mantra is one of the most popular Buddha mantras all over the world. Tibetan Buddhists chant this mantra as a prayer to invoke Chenrezig, or "compassion personified," blessings, power, and loving attention. The emphasis of this mantra is on both offering and receiving compassion. Om Mani Padme Hum, Om: I invoke the sound of the universe Mani: the jewel, which is the goal of love, compassion and enlightenment Padme: Wisdom of Lotus Hum: Pure indivisible unity of wisdom.

The Amitabha Mantra is dedicated to the Amitabha Buddha. This mantra means “To overcome all the hindrances and obstacles. This Buddha mantra is believed to protect the chanter from harm while helping them overcome different obstacles standing in the way of Enlightenment. Om Ami Dewa Hrih Om: I invoke the universal sound Ami: limitless light Dewa: Buddha nature Hrih: With self respect.

Buddhists all around the world chant Buddha mantras to inspire and motivate themselves to be on the path of enlightenment. They do so by chanting the mantras while meditating alongside a number of Buddhist arts. Chanting the Buddha mantras in presence of Buddhist images, artifacts and Buddha statues may help bring out many positive changes in the lives of the practitioner as doing so may make him or her feel closer to the Buddha himself.